In last week’s post (https://animalmechanicalandme.com/2016/03/10/the-sounds-of-the-in-valid-youth-project/) we introduced an initial track to set the scene for the In-Valid Youth film project that had been put together by the sound artist on our team, Patrick Walker.

You can find out more about Patrick and the rest of the team here: https://animalmechanicalandme.com/in-valid-youth/meet-the-in-valid-youth-project-team/

Below, Patrick shares some insights on the fascinating process behind developing such a track:

After setting up the studio to work on this project, I decided to look at some toys and little gadgets, the smaller the better! The first thing I picked up is a tiny music box which when you turn the handle plays the theme tune for the pink panther. For such a small machine, it produces a very haunting tone which is delicate yet resonant. 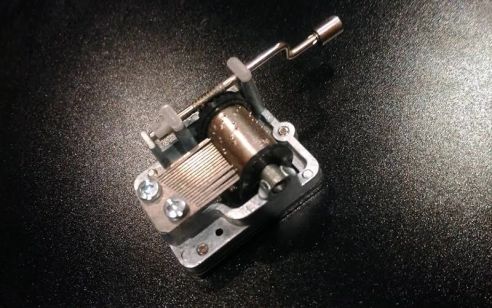 It’s quite a fiddly little device to record, but after experimenting with different positions, I found an angle where I could turn the handle without interrupting the sound of the recording.

After recording the sounds, these were split into individual tones, the eventual goal will be to make a virtual instrument, based on the tones of the music box, allowing us to create new melodies from scratch but for now, I contented myself with simply selecting some notes which could be recombined to make a simple melody.

I did not allow myself too much time to do this. At this stage, the last thing I want to do is get too caught up in creating whole tracks so as soon as I had something which resembled a loop-able melody, I decided to move on to other sounds.I started by dialing up some old things I had recorded, a toy robot – again perfect for the theme of cyborgs and how to make them more friendly.

After a while, I’d recorded and selected a number of sounds, mostly clockwork whirring and clicking. These sounds were then combined with previous sounds that I had used for the last Wellcome Trust project along with selected sounds from my archive – Hard Drives Booting up, Typing and the sounds of old dot-matrix printers (which were used for the introduction to our final video).

This gave me a range of appropriate sounds which I then programmed into one long section, adding little micro-edits here and there, panning the sounds around and experimenting with the use of a soft chorus plug-in to try and make the sounds a little less harsh and a bit more modulated sounding (in turn becoming more humanised and less rigid).

This is something which again I started to play around with concept-wise, not only thinking about how to make machines sound more humanised but how to go the other way – and for this reason there were a couple of little squelchy sounds which were edited in such a way that they ended up sounding more like intricate motors. I then overlaid some of the machine textures with the initial sound of the music box and then added some white noise and very simple textures to fill in some spaces.

The final sketch I have created is very simple, and at the same time, authentic in the sense that it’s all made from delicate little machines as opposed to becoming more synthesised, arranged or produced. Although it’s designed to be a showcase of sounds, I feel that it does retain some musical value, the tones are very haunting.

We'd love to hear from you: animalmechanicalandme@outlook.com